Struggling with a clogged sink? Before you call out a professional, attempt to unblock it with these quick and easy techniques!

Noisy pipes are a common occurrence, especially in older homes. While strange noises coming from your pipes can be irksome, they can also be worrying. Nobody wants to experience plumbing problems, the prospect of which conjures up thoughts of all sorts of nightmare scenarios, from emergency leaks to expensive replacements.

Fortunately, noisy pipes are not often cause for concern if dealt with properly. The issue usually lies with simple issues that you can either handle yourself, or that can be dealt with through a routine call-out. Take the advice of an expert Plumber in London and follow the Homecure Plumbers guide to silencing those irritating noisy pipes.

Sometimes, the most obvious answer is the right answer. Pipework allows for the movement of water around your home, which means something is being carried through them, resulting in pressure and friction.

If you hear clunking, rattling or vibrating from your pipes, it could simply be that your pipes aren’t fitted correctly. It could be the case that they never were fitted properly, or they’ve come loose over time. Either way, they need to be fixed.

If you can access the pipework, because its exposed or you can take simple steps to reach it, then attempt to re-establish appropriate fitting by tightening bolts or replacing worn-out fixtures. In some circumstances, you will be unable to reach the pipework, or new fixtures will not solve the issue as the piping has to be re-routed. In these particular scenarios, we recommend professional help.

It is common practice for pipework in the home to be made from copper. It’s a durable, malleable metal that has replaced the use of lead and steel in the modern era. However, copper is known to expand and contract with temperature.

If you are are experiencing noisy pipes, but it only occurs after you use hot water, the culprit is likely expanding copper pipework. This occurs when the pipe rubs against joints, brackets and support structures, or other hidden elements of your home, as it expands with heat. This is not a problem to be concerned with at all, as the metal is designed to handle such stress. However, if it is becoming an annoying issue, there are some methods of noise management: 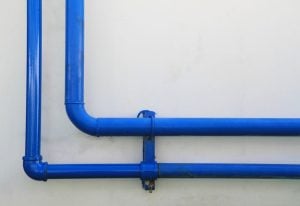 Thuds and bangs within your pipework are perhaps the most alarming type of noise you can hear. They also have the potential to result in damage. The cause is often what is known as a water hammer.

A water hammer occurs when protection systems start to fail. Air chambers are installed near taps to stop rushing water slamming into valves when taps are turned off. Over time, however, water starts to replace the air, reducing the stopping power of the air chambers and allowing the liquid to crash into the valves; making that thudding noise. To fix the issue, you need to replenish the air supplies of the chambers. Doing so will silence those noisy pipes.

How do you fix a water hammer?

Your air chambers will now be replenished with the air required to absorb shocks and eliminating the thudding sound. If this does not work, we advise you request further help from a professional plumber.

High water pressure is another cause of noisy pipes that can actually have serious consequences if not handled properly. However, it also has a very simple solution. Noise will occur if water pressure is too high, simply because it is being forced through pipework too quickly and is crashing around.

Water pressure should be between 1 to 1.5 bar. Any higher and your pipes and appliances will be overworked and can become damaged. Most boilers have a pressure metre and regulator installed. Simply look at your boiler and find out what the pressure is. If it is too high, adjust the regulator (you may need to consult your boiler manual).

5. Blockages and Sludge Build Up

Over time, wear and tear occurs in pipework, especially in hard water areas. Central heating systems also create sludge that can circulate through your pipes. In both these cases, solid particulates will start circulating your system, causing noisy pipes. The sounds you’ll hear will likely be a clinking or rattling; imagine grit hitting the side of metal.

This is the only problem on this list that we suggest you as a homeowner do nothing about. Instead, call out a plumber to solve this issue for you. It is highly recommended you do not attempt to drain pipes yourself. Check out our service on boiler repairs in London in more detail.

Need assistance with noisy pipes in your home? Contact the Homecure Plumbers team now to call out a plumber in North London or the Greater London area.

Really pleased with the service from the arranging the work to the guy being at my house, had a Toilet installation and Water Tank Repair completed in one afternoon. Engineer was polite and friendly, got on with the work and explained what work would be done. Definitely be using the team at Home-Cure Again.

Polite, clean and helpful engineer who took the time to explain the fault with my boiler. Very good service. I have made an appointment for them to come back to fix a dripping tap in my bathroom.

I woke up to no heating or hot water...in winter! The boiler had no pressure and was showing an error code. I Googled local plumbers and came across Homecure Plumbers website. I called them and made an appointment for that day. The engineer came round and found the issue. I was given a quote which I accepted and he went about fixing the issue. The engineer was polite, informative and efficient. I went from a stressful situation to having no hot water and heating back on within a couple of hours. Will definitely be using Homecure again in the future.

At Homecure we have been regularly updating our working practices in line with health and safety advice provided by the Government. For customers who are self-isolating and in need of emergency plumbing and heating services we want to assure you that we are doing everything possible to minimise the risk of the spreading the coronavirus while we carry out our tasks.

All members of our team currently working will be following the infection control measures laid out by the World Health Organisation:

When our team members are visiting customer’s properties, they will use alcohol-based hand sanitiser (60% minimum) to clean their hands before and after the job has been completed. They will also have access to personal protective equipment (PPE) that can be used:

Homecure remain available to provide emergency services for your home during the current pandemic. If you wish to book an appointment with our team and a member of the household is currently in isolation, has symptoms, or has been diagnosed with COVID, we ask that you inform us before our arrival so we can prepare accordingly.

As the situation continues to change we will update our health and safety protocols to ensure our customers and team remain safe at all times.

COVID-19: We are still open as usual. Find out how we are keeping our customers safe during this time.